The oil and gas fields, whose resource potential have been evaluated include Kingfisher, Mputa, Waraga, Nzizi, Kasamene, Kigogole, Nsoga, Wahrindi, Ngara, Ngege, Ngiri, Jobi-Rii, Gunya, all of which are under production licenses. This is in addition to Mpyo and Jobi East which are under appraisal awaiting award of a production license together with Lyec field which has reverted to Government. Two (2) applications for issuance of Production Licences over discoveries Mpyo and Jobi-East are being discussed between the oil companies and Government. Also assessed are the potential for prospective resources within Ngassa, Kanywataba, Turaco, Taitai, Karuka and other areas of Albertine Graben with data. The exploration and appraisal of the oil and gas discoveries in the Albertine Graben has led to an increase in the country’s petroleum resource base from an estimated 300 million barrels (MMBBL) to 840 million barrels of Stock Tank Oil Initially in Place (STOIIP), when the Oil and Gas policy was approved in February 2008, to the current estimate of 6.0 billion barrels, of which 1.4 billion barrels is estimated as recoverable. In addition, gas resources are currently estimated at 500 Billion standard cubic feet (BCF).

Uganda’s Petroleum resources are classified in accordance with SPE-PRMS as Reserves, Contingent resources and Prospective resources. The resources documented for Uganda include both the discovered (reserves and contingent resources) and undiscovered (prospective) resources. The petroleum resource estimates for the country are generated based on the PAU’s assessment using the available data and harmonization with the resource reports submitted by the licensees. Reserves are quantities of petroleum anticipated to be commercially produced, from known accumulations, by applying available technology to develop the projects from a given date under defined conditions. Reserves must satisfy the four criteria of having been discovered, recoverable, commercial and remaining (that is, still available at the date applied). For the Albertine Graben therefore, reserves include recoverable petroleum resources in the oil fields for which production licenses have been granted and Front-End Engineering Designs (FEED) have been completed. ‘Reserves’, are therefore, only in the oil fields, which are awaiting the Final Investment Decision (FID) and are currently estimated to be 1.0 billion barrels. Contingent Resources are quantities of petroleum estimated to be potentially recoverable, but currently not considered to be commercially recoverable due to one or more contingencies. Contingent resources may include; projects where the development plans have not yet been approved, where commercial recovery is dependent on technology under development, where data is insufficient to clearly assess commerciality, or where regulatory or social acceptance concerns may exist. In the Albertine Graben, contingent resources include those from discoveries whose development plans are still under consideration, those which will come on stream five (5) or more years after first oil, and the resources expected to come from Enhanced Oil Recovery (EOR). If these contingencies are removed, the total reserves in the Albertine Graben will increase to 1.4 billion barrels. In order to enable more Contingent Resources to go into the classification of reserves, Government has put in place measures to ensure that licensees plan for EOR early in the production of the different oil fields. EOR is the extraction of additional petroleum, beyond primary (or natural) recovery, by supplementing the natural forces in the reservoir through methods like polymer flooding, steam or hot water injection, injection of carbondioxide and thermal injection, among others. Accordingly, the companies with production licenses have presented estimates based EOR mechanism using polymer flood. The reserves which are expected to become available only after implementation of EOR are therefore included under contingent resources. Prospective Resources are quantities of petroleum that are estimated to be discovered once exploration is undertaken. These include resource estimates from exploration licenses but also resource estimates from areas that are not yet licensed. In the Albertine Graben, over 60% of the acreage has not undergone exploration and 85% of the acreage is currently not under any licence. This means that 25% of the area which is currently not licensed has undergone some level of exploration. Attempts have been made to come up with resource estimates for the different prospects within these unlicensed areas. However, these are always not reported since the prospects have not yet been drilled and therefore the resources have not been discovered.

To-date 9 Production Licences (PLs) have been awarded over 14 fields in the Albertine Graben. 9 of these fields are planned to be brought on stream at First Oil (FO). These include; Ngiri, Jobi-Rii, Gunya, Kasamene-Wahrindi, Kigogole-Nsoga and Kingfisher fields. The remaining 5 fields with production licences i.e. Ngara, Ngege, Mputa, Nzizi and Waraga are planned to be brought on stream 5-8yrs after FO subject to availability of ullage.

Based on the above descriptions therefore, Uganda’s in place oil resources (Stock Tank Oil Initially in Place ( STOIIP) in the Albertine Graben are currently estimated at 6 billion barrels out of which 1.0 billion barrels are reserves (Recoverable at current conditions) and these reserves can be increased to 1.4 billion barrels from Contingent resources. The planned lifecycle for production of the estimated reserves from the Kingfisher and Tilenga projects is 25 years. This is expected to be prolonged when some of the current contingent resources become reserves. It is important to note that the reported resources depend on the interpretation of the available data and the technology for extraction, which is existing at the time and therefore often change when more data becomes available. 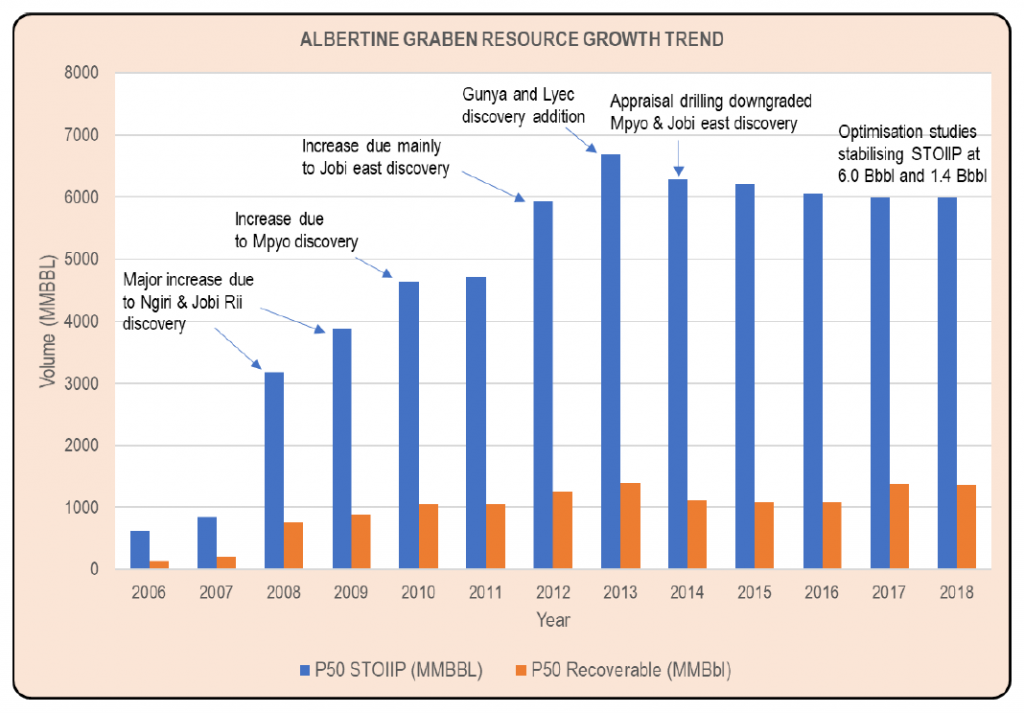