The
Tilenga Project, covers three (03) PLs from CA-1 operated by TEPU and three
(03) PLs from LA-2 operated by TUOP. The PLs include; Jobi-Rii, Gunya, Ngiri,
Kasamene-Wahrindi, Kigogole-Ngara and Nsoga. The project includes the following
facilities:

iii)     Over 160 kilometres of flow-lines which will transport crude oil and water from the wells to the CPF.

iv)    95 km 24 inch feeder pipeline which will transport the processed crude oil from the CPF in Buliisa to the export hub and Refinery in Kabaale in Hoima District.

Other supporting infrastructure include;
Victoria Nile Crossing, Temporary and Permanent Operation Support Base camps and a Lake Water Abstraction Station 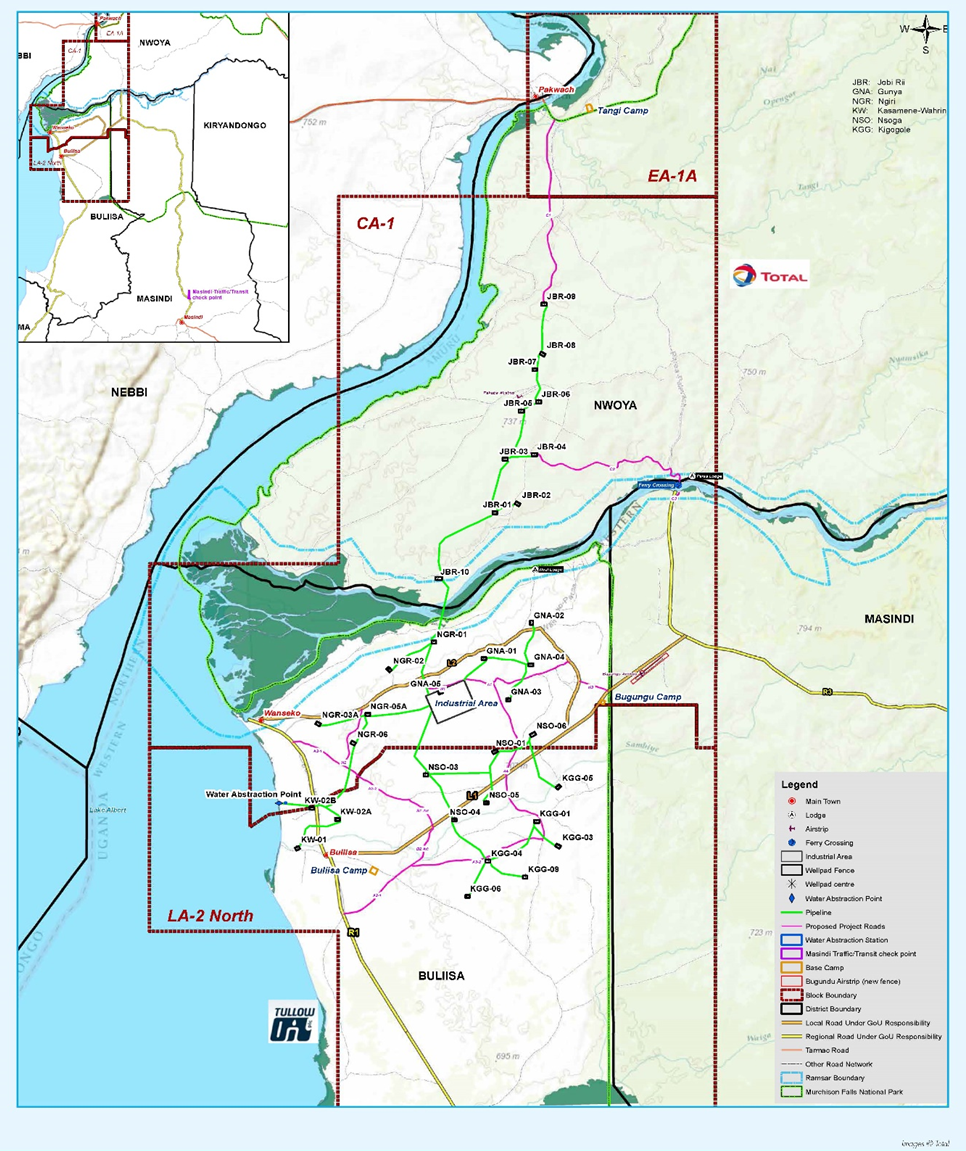 Layout of the major components of the Tilenga project

The key activities being implemented by the licensees and monitored by the PAU for the Tilenga project included the FEED study, ESIA study, procurement and contracting of Wells and Drilling Related Services, Technical Surveys, Sub-Surface Studies and Land Acquisition.

i)    TEPU and its partners agreed to an integrated approach for the Tilenga Project. The Tilenga FEED Phase 1 commenced in January 2017 and the three (03) contractors, namely, Technip, Fluor and CB&I submitted their final deliverables on 24th July 2017. By the end of Phase 1, there was a significant decrease in the estimated costs for the Engineering, Procurement, Supply, Construction and Commissioning (EPSCC). CB&I and FLUOR were selected to continue to undertake FEED Phase-2 for the oil and gas production facilities including the CPF, lake water abstraction and flowlines, which began in October 2017 and the FEED FEED Phase deliverables were submitted to the PAU on the 30th May, 2018. These were reviewed by a multi-disciplinary team from the PAU and several discussions held between the operator and Government to align on some technical aspects in the FEED Phase 2.

ii)  TEPU has undertaken the FEED for the Enabling Infrastructure including access roads, wellpads, Masindi Check Point, construction camps and Industrial Area among others. These are facilities are key enablers required prior to the drilling operations and construction/installation of the oil and gas facilities.

iii)   In addition to the FEED, the PAU monitored and participated in the following technical studies for the Tilenga Project: sub-surface studies, whose results will be incorporated in the revised FDPs and PRRs expected to be submitted by TEPU prior to FID; Drilling and Well Engineering studies including optimisation of well designs, well trajectories, well count and pad number and location; Geotechnical and geophysical survey works for the CPF, Nile Crossing, Well-pads, Flow-lines and Feeder-lines and the Lake Water Abstraction (LWA) area and Enabling Infrastructure (EI) areas; ground-water investigations during 2018/2019 in the Tilenga project area; annual well integrity campaigns to check integrity of wellhead assemblies and production trees of well of exploration and appraisal wells.

iv)  The ESIA report for the Tilenga project was submitted to NEMA in June 2018. The PAU and other Government Ministries, Departments and Agencies (MDAs) reviewed the report and submitted comments to NEMA. Subsequently, the PAU organized two public hearings for the ESIA on 12th and 15th November, 2018 in Buliisa and Nwoya Districts, respectively. One of the key issues raised during the review included the lack of an Environmental and Social Management Plan (ESMP) for the Tilenga project.  Following the hearings, an updated ESIA report was submitted and NEMA issued a conditional ESIA
certificate for a period of 10 years in April 2019. 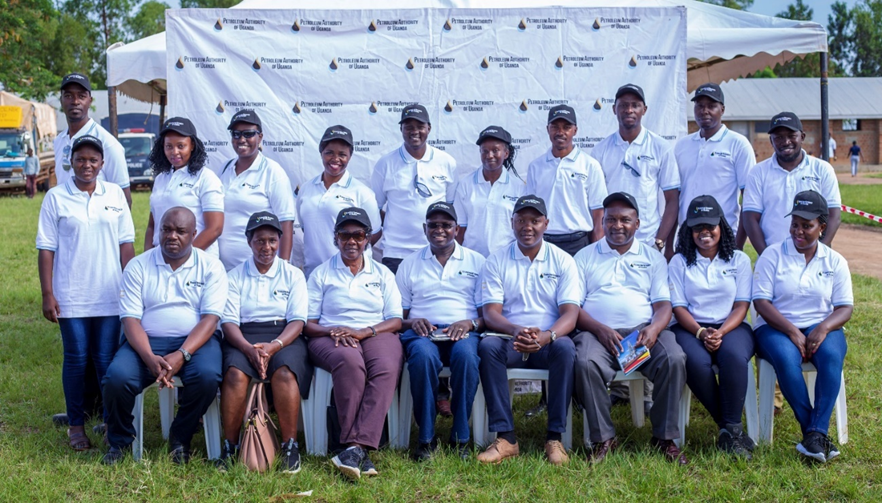 The PAU Board, Management and staff at the Tilenga Project ESIA Public hearing in Nwoya district.

i)    The total land requirement for the Tilenga Project is approximately 2,400 acres.  The land acquisition process includes developing and implementing five (05) RAPs in a phased manner. The land acquisition process for the Tilenga project stands at 15%, with only RAP 1 for the industrial area at 90% implementation, while the planning phase for the other four (04) RAPs has been concluded.