Exploration and Appraisal of Oil and Gas Discoveries

In Uganda the most prospective area with potential for Petroleum is the Albertine Graben. The first assessment of the oil and gas potential of Uganda was made by a Government Geologist by the names: E.J. Wayland who documented hydrocarbon occurrences in the Albertine Graben in 1920s. This was followed by drilling of many shallow wells around Butiaba and Kibiro localities with the deepest well called Waki-B-1 drilled in 1938. Thereafter, there was no activity until the 1980s because there were political instabilities in the country due to the 2nd World War and the post-independence turmoil in the Country.

There was however renewed interest in the region in the early/mid-eighties. Subsequently, in 1983/4 aero-magnetic survey was undertaken to quickly identify potential areas with the hydrocarbons in the western part (Rift System) of the country. In 1984 a Petroleum Unit under the Department of Geological Survey and Mines was created and in the following year the first legislation for petroleum exploration and production was enacted in 1985. The 1990s saw the acqusition of additional geological and geophysical data which was used to promote oil exploration in Uganda in International Fora.

These efforts were successful and the country was able not only to attract investors but investment capital as well. Companies that specialize in exploration were licensed – starting with Petro Fina in 1991 and Uganda General Works Engineering Company in 1993. These two companies although they did not do any work, they opened the door for more serious investment.

Their successors Heritage Oil and Gas Limited (Heritage), Hardman Petroleum and Energy Africa, licensed between 1997 and 2004 in different areas, undertook the more expensive seismic surveys and drilling on land and Lake Albert.

The first deep wells (Turaco- 1, 2, 3) that were drilled by Heritage in the Semliki Basin between 2002 and 2004 (in Western Uganda) did have positive results in terms of encountering some hydrocarbons. This restored the hope of those that had vested their time, money and in-deed their lives in this sector. This good news however had mixed results as the natural gas tested in the Turaco-3 well was heavily contaminated with Carbon dioxide. The technology to process this gas exists, and both gas and CO2 can be commercially viable. But it is important to appreciate that the focus at this time was the search for oil before options of utilizing the gas could be explored further, especially in a virgin basin where no prior discovery had been made.

Heritage relinquished this area but was later convinced to aquire a license in Exploration Area 3A and Exploration Area 1, along with a partner, Energy Africa in 2004. For Hardman Africa, the story was better. Ugandan scientists, who basing on the interpretation of the data acquired insisted that the next wells are drilled on land in Kaiso Tonya (Hoima District) rather than the lake. It would have taken longer and more expensive to mobilize the equipment to drill on the lake.

One hundred and twenty one (121) exploration and appraisal wells have been drilled with one hundred and six (106) wells encountering oil and/or gas which is an unprecedented drilling success rate of over 85%. This includes 39 Exploration adn 82 Appraisal Wells with 36 wells flow tested.

In addition, over 10,000 kilometeres of geological mapping has been undertaken and Aerial Magnetic Data, Ground Gravity & Magnetic Data, Full Tensor Radiometry Data has also been acquired.

The exploration and appraisal of the oil and gas discoveries in the Albertine Graben has led to an increase in the country’s petroleum resource base from an estimated 300 million barrels (MMBBL) to 840 million barrels of Stock Tank Oil Initially in Place (STOIIP), when the policy was approved in February 2008, to the current estimate of 6.5 billion barrels, of which 1.4 billion (BBBL) is estimated as recoverable. In addition, gas resources are currently estimated at 500 Billion standard cubic feet (BCF). Government uses the Petroleum Resources Management Systems (PRMS) to estimate and report the country’s petroleum resources

These are the first Production Sharing Agreements to be signed in line with Section 58 of the Petroleum Exploration, Development and Production Act 2013, the Legal regime under which the Minister for Energy and Mineral Development announced the First Competitive Licensing Round during February 2015.

Some of the key provisions of each of the PSA which include;

The award of the licenses was cleared by Cabinet and the Ministries of Finance, Planning and Economic Development together with that of Justice and Constitutional Affairs, and the PSAs laid on the floor of Parliament. The agreed work programmes will be monitored and regulated by the Petroleum Author of Uganda.

The Ngassa block, which was initially part of EA2 licensed to Tullow, is covered with good quality 2D and 3D seismic data acquired between 2003 and 2008. Since the structure lies entirely under the lake, two deviated wells, Ngassa-1 and Ngassa-2 were drilled on land at the periphery of the main structure between 2007 and 2009 respectively in order to access the reservoirs. Both gas and oil shows were encountered by the two wells. Due to relinquishment obligations in the PSA, Tullow relinquished this part of EA2. However, a large part of the structure still remains untested, hence the need to relicense it.

The Ngassa block has been stratigraphically delineated. Stratigraphic licensing is aimed at ensuring that the full potential of the acreage is explored since companies may be inclined to relinquish shallow reservoirs as they tend to be more gas prone in the Albertine Graben, as opposed to the deep reservoirs which are more oil prone.

Uganda’s first licensing round covered six blocks with a total acreage of 2,674 Km2 in the Albertine Graben, Uganda’s most prospective sedimentary basin. Out of the nineteen (19) applicants at the Request for Qualification Stage, sixteen proceeded to the Request for Proposal stage and four emerged successful and proceeded to the negotiations stage. This first licensing round was undertaken in line with the National Oil and Gas Policy for Uganda (2008) and in accordance with the Petroleum (Exploration, Development and Production) Act 2013. 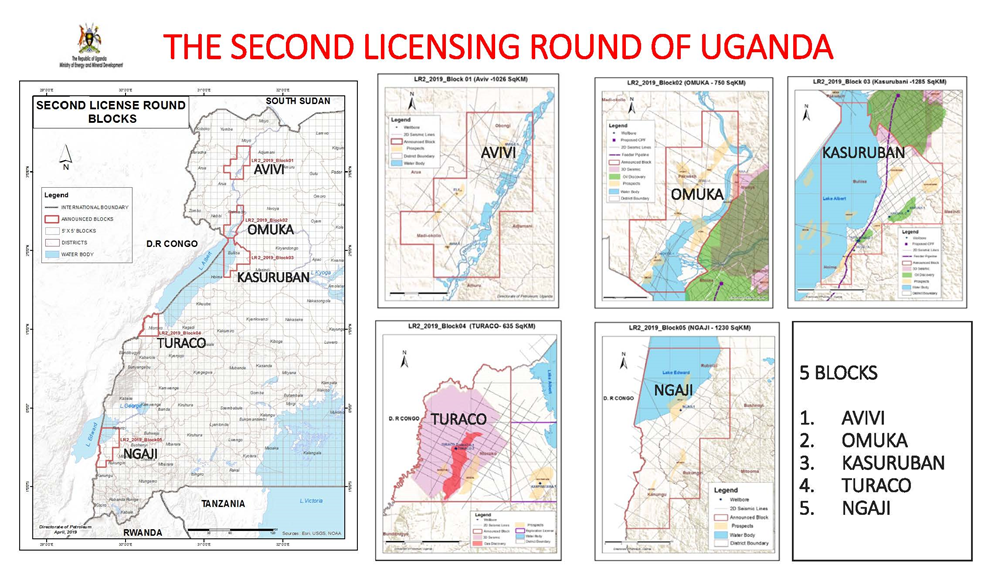