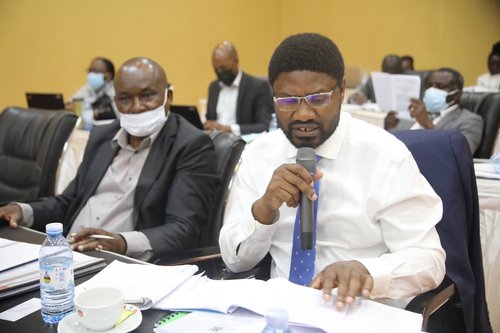 Government stakeholders spent the best part of last week courting the Environment and Natural Resources Committee (ENRC) of Parliament to support the enactment of the crude oil pipeline law. The government agencies engaged the legislators during a retreat in Kampala between October 26 to 30, 2021, intended to enable the MPs to appreciate the East African Crude Oil Pipeline (EACOP) (Special Provisions) Bill 2021.The Bill’s First Reading in Parliament was on October 5, 2021, before being referred to ENRC for processing over 45 days.

Leading the Government stakeholders, the Minister of Energy and Mineral Development, Dr Ruth Nankabirwa Ssentamu, called on the Committee to expeditiously handle the Bill. She said the National Development Plan III identified the Petroleum Sector as an anchor for transforming the economy through revenue generation, infrastructure development and job creation.

“The country has been eagerly waiting for Uganda to achieve its first oil, and we have fulfilled most of the requirements. The EACOP is among the last steps to ensure the development of the projects leading to the first oil. The ball is now with Parliament to ensure the enactment of the EACOP Bill expeditiously,” said the Minister.

The Attorney General, Kiryowa Kiwanuka, said the EACOP law would domesticate an existing treaty between Uganda and Tanzania before the EACOP Company embarked on the pipeline construction.

“We did some excellent work on this Bill, and if I may, you should consider accepting it as is,” said the Attorney General, adding that the law would operationalise the business venture Uganda, Tanzania and other project partners.

“The law will kickstart the commercialisation of Uganda’s oil and gas resources and facilitate the upstream partners to take the long-awaited Final Investment Decision and progress the development of the Petroleum sector.

“We’re only ensuring unity in purpose. Parliament has the mandate to ensure that this significant milestone is achieved timely and in a manner that meets the expectation of all players in the industry.”

The State Minister for Energy, Sidronius Okasai Opolot, said that the government technical officers would remain available to the MPs throughout the process and avail the documents required to enrich the work. The ENRC Chairperson, Dr Emmanuel Otaala, said his team is dedicated and would process this Bill within the allocated time and forward it to the Committee of the Whole House for its Second Reading.

“We’re interested in first understanding how the EACOP project will transform the lives of ordinary Ugandans and the viability and sustainability of this crude oil pipeline?” The government technocrats made detailed presentations to the ENRC and jointly reviewed the EACOP Bill 2021 clause by clause.

The engagement attracted the Ministries of Energy and Mineral Development, Finance, Lands, and the Attorney General’s Chambers. Others were the Petroleum Authority of Uganda (PAU), Uganda Revenue Authority, National Planning Authority, and the National Environment Management Authority. The Energy Ministry’s Permanent Secretary, Irene Bateebe, urged the MPs to support the Bill, saying, with the law in place, Uganda has an opportunity of attracting investment worth US$ 15 billion into the sector.

The PAU Executive Director, Ernest Rubondo, called on all the oil and gas sector stakeholders to move simultaneously. “If ENRC doesn’t support the speedy enactment of the Bill, we’ll be at a loss as a country regarding the oil resource,” he said. The enactment of the enabling legislation is therefore a major pre-requisite and outstanding commitment on the Government of Uganda to facilitate the midstream, Mr. Rubondo appealed to the MPs.

“We have 25 days left for this assignment. We shall work with all the dedication and concentration to deliver on this assignment in time,” Dr Otaala said on 31st October 2021 as the retreat closed.

▪ East African Crude Oil Pipeline (EACOP) Ltd was incorporated in England and Wales. It has registered branches in Uganda and Tanzania for tax purposes.

▪ The Crude Oil Pipeline will be 1,443km long between Hoima in Uganda to Tanga Port in Tanzania (296km in Uganda and 1,147km in Tanzania).

▪ The Uganda’s (UNOC) total financing requirement to EACOP is US$ 293 million. Government already advanced UNOC with US$130 million for first cash call obligation.