The Society of Petroleum Engineers for the Uganda section won an international award for section excellence. This award is presented to only 20% of the 203 SPE sections in the world. The award is in recognition of the SPE Uganda’s exceptional efforts in technical knowledge dissemination, operations, member benefits, society and community outreach and innovation. 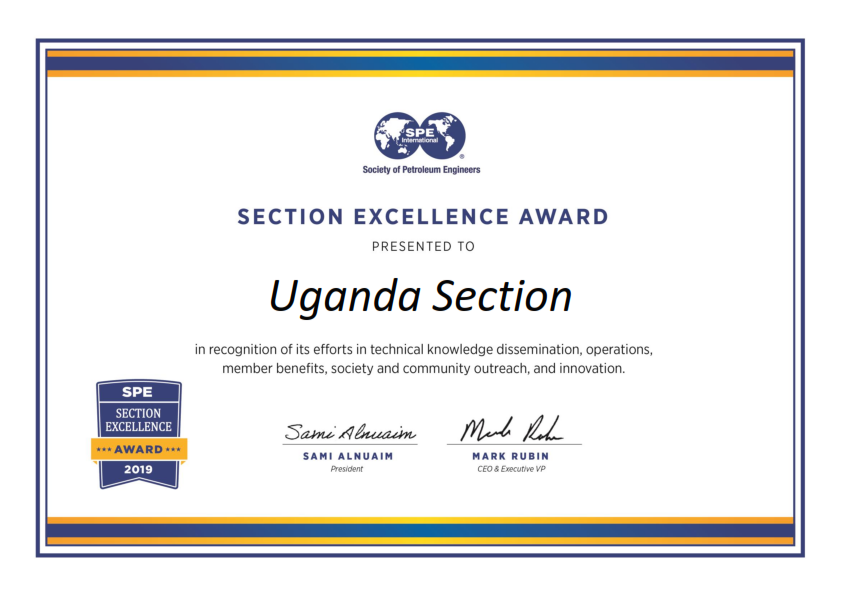 Among the key innovations, the Society of Petroleum Engineers (SPE) Uganda section has developed an initiative tagged “Energy 4 U” to promote cleaner, safer and sustainable energy options in Ugandan communities.   The objective of this initiative is to educate young children about the effects of unclean energy, while providing information on cleaner energy solutions like gas, solar, wind and biomass energy.

According to Mr. Ernest Rubondo, Chairman of SPE Uganda and the Executive Director of the Petroleum Authority of Uganda, the “Energy 4 U” initiative will be achieved through self-teaching comic strips and fun activities that are designed to be immediately appealing and understood by primary school children.

Mr. Rossini Silveira, the SPE Director and Chairperson Oil and Gas Skills Council under the Ministry of Education and Sports added that children have been targeted because of the good opportunities they have to influence their families and communities in the promotion of a green energy culture in simple ways.

The initiative is coordinated by SPE Uganda in collaboration with Reminac Comics Uganda and the first issue of the comic strip titled “The Energy Adventures of Adriko and Nampijja” will be published during September 2019.

Studies carried out by the Health Effects Institute (HEI) and Institute for Health Metrics and Evaluation (IHME) reveal that in 2017, air pollution in Uganda resulted in 13,000 deaths. Of these, more than 10,000 deaths in Uganda were due to inhaling toxic fumes from indoor wood and charcoal-burning cook stoves. The studies also show that Uganda’s population, especially the rural population, is heavily dependent on wood fuel (charcoal and firewood), with most of it used for meal preparation in primary and secondary schools.

According to the National Environment Management Authority (NEMA) Environmental Information Network Bulletin Issue 1 (Jan-Mar 2019), Uganda lost 487,472 hectares of forest cover from 2010 to 2015, which is an annual deforestation rate of 4%. If these trends continue, Uganda will have no natural forest cover in the next ten years and a significantly increased death rate resulting from indoor pollution. 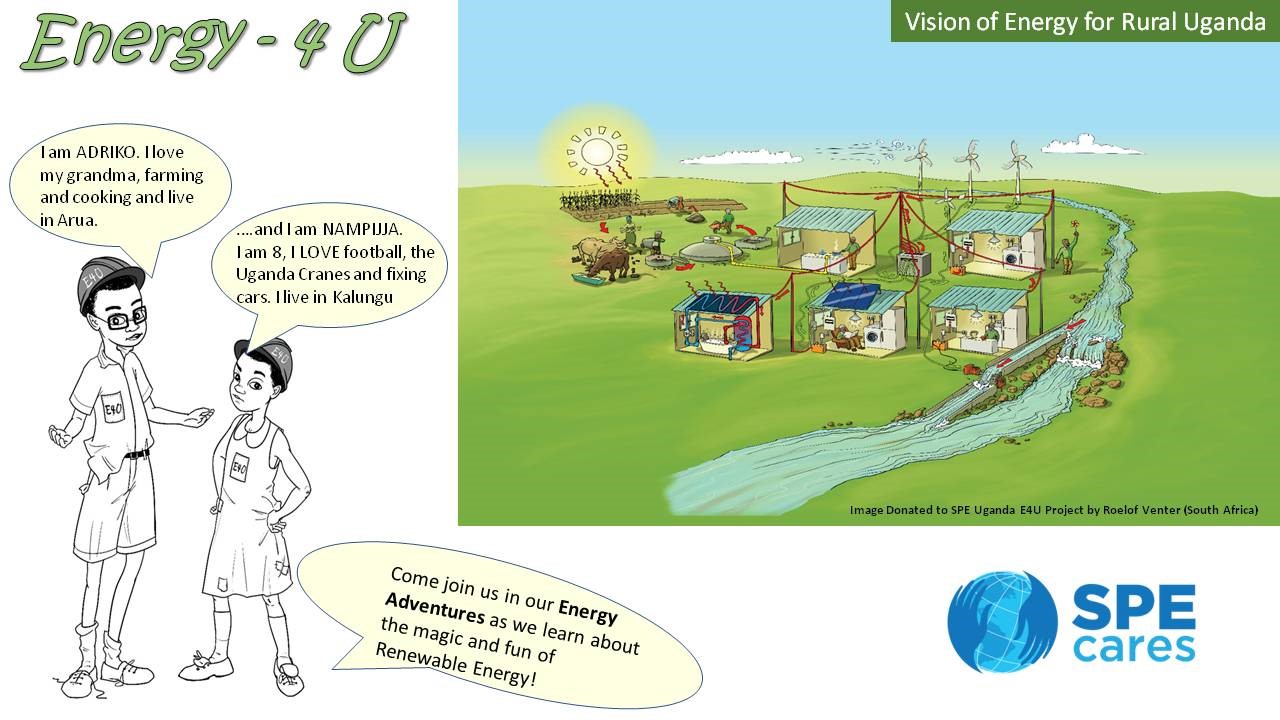 The Energy 4 U comic strip characters – Adriko and Nampijja

In addition to the “Energy 4 U” initiative, SPE Uganda has maintained its regular professional lectures which are delivered as a way of disseminating technical knowledge about the oil industry. Since January 2019, five professional lectures on the oil and gas sector have been held with the most recent one held during July 2019 that featured Mr. Santosh Chandra of Tullow Uganda, and Mr. Martin Roy of Barclays Bank, that delivered lectures on “Drilling and Completion Technologies” and “Opportunities in the Finance Sector”, respectively.

Other SPE lectures held earlier in the year include one by Mr. Luc Cantegrel of Total E&P on the topic “Tilenga Field Reservoir Challenges and their Solutions” held in June 2019, another titled “Demystifying FID” by Mr. Nick Stranks of Tullow Uganda in April and “Safety in the Oil Industry” by Mr. Greg Coleman from the Virtual University of Uganda in May 2019.

Subsequently, the SPE will have a lecture this month featuring Dr. Joseph Kobusheshe of the Petroleum Authority of Uganda on the topic, “The story of Environment Management of Oil and Gas Activities on Uganda.”

Professional and student members of the SPE Uganda section at a lecture on Tilenga on 12th June 2019 by Mr. Luc Cantegrel of Total E&P.

SPE also continued its mentorship programmes through its five student chapters in Makerere University, Kyambogo University, Nkumba University, International University of East Africa (IUEA) and the Uganda Petroleum Institute, Kigumba (UPIK).  As part of this programme, Ms. Proscovia Nabbanja, the SPE Uganda’s Mentorship Chairperson and who also is acting CEO at the Uganda National Oil Company, coordinates visits to the student chapters where the students are equipped with skills required for their professional development. SPE Uganda has also availed an e-mentoring platform where student members of the society are matched to and mentored by professionals in the oil and gas industry across the globe.

Ms. Maria Nakibuule, one of the Student Liaisons for SPE Uganda, said a student paper contest has been organised to train students in academic paper writing. “This contest covers topics on Uganda’s oil and gas industry by the different student chapters, and reviewing of the abstracts which have been submitted is ongoing,” she said.  The student chapters are also organising the Annual SPE student Chapter Petroleum Exhibition and Conference to be held during October, 2019, where the students will exhibit their oil and gas-related projects.

SPE is an international not-for-profit professional organisation whose mission is to collect, disseminate and exchange technical knowledge concerning the exploration, development and production of oil and gas resources and related technologies, for the general benefit of the oil and gas sector.  The Society which is headquartered in Texas, USA and has current membership of over 156,000 professionals in 203 sections in 154 countries sections around the world.  The Society of Petroleum Engineers, Uganda section which was established in 2011, is one of these sections and currently comprises of 1153 members of whom 1011 are student members and 142 are professional members.