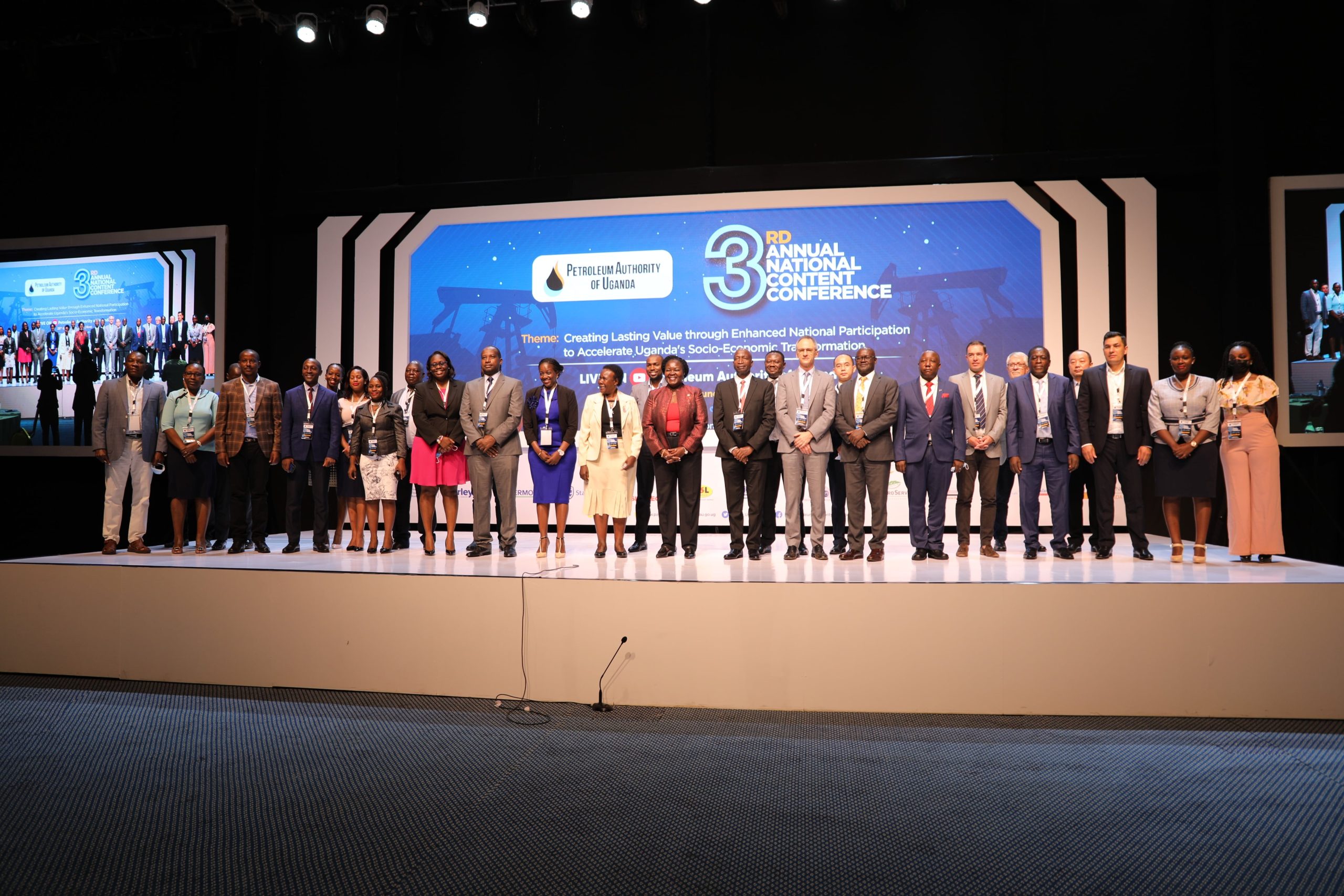 KAMPALA: The Oil and Gas sector has been identified and prioritised as one of the sectors with the greatest multiplier effect on the economy. Hon. Ruth Nankabirwa Ssentamu, the Minister of Energy and Mineral Development made this revelation during the recently concluded two-day 3rd Annual National Content Conference that was organised by the Petroleum Authority of Uganda (PAU).

While opening the conference, Hon. Nankabirwa said that the oil and gas industry is one of those sectors that the National Development Plan (NDP) III which will lead to a take off for Uganda’s economy. The others that are intricately linked to the oil and gas sector are Tourism, Agriculture, Infrastructure and Human Capital Development.

“It is important that the strategies to enhance value retention are concretised to ensure that the Oil and Gas sector transforms the social and economic lives of Ugandans,” Hon. Nankabirwa added.

Held under the theme, “Creating Lasting Value through Enhanced National Participation to Accelerate Uganda’s Social Economic Transformation”, the conference brought together several oil and gas contractors and sub-contractors who shared experiences on how best Ugandans and Ugandan enterprises could reap the benefits of the construction phase. The announcement of the Final Investment Decision (FID) by the Joint Venture Partners in February 2022 has sparked off a ramp up of construction and other activities for the oil projects.

According to the data shared by the Ministry of Finance, Planning and Economic Development (MoFPED), Uganda has already reaped financial benefits from the Petroleum Sector. In his keynote speech, Mr. Ramathan Ggoobi, the Permanent Secretary and Secretary to the Treasury said Government has already earned both tax and non-tax revenue from the sector.

“According to the Authority’s Upstream Benefits Report for the period 2017 to 2019, the direct benefits to Government in form of Tax revenues was UGX 212.7 Billion and Non Tax-Revenue (NTR) was UGX 22.1 Billion, while the indirect benefits to Ugandan nationals was realized in form of; procurement of local produced goods and services UGX 161.2 Billion, employment of 247 Ugandans earning salaries amounting to UGX 85.6 billion, Training of Ugandan Nationals in the private sector, Government and in the Oil Companies costing UGX 12.9 billion and, corporate social responsibility engagements costing UGX 0.76 billion. The total expenditures by the international oil companies in Uganda during the period 2017 to 2019 was well above UGX 495.2 billion,” said Mr. Ggoobi.

Giving insights about the oil and gas investment advancement, Mr. Ernest Rubondo, the Executive Director at PAU revealed that investment in the sector grew from USD 180 Million in 2020 to USD 500 Million in 2021 and is projected to grow to USD 3 Billion this year (2022).

Mr. Rubondo revealed that during 2020, Ugandan companies were awarded contracts worth USD 10.7 Million in the country’s oil and gas sector.

“In 2021, the value of contracts awarded to Ugandan companies in the sector increased to US$ 200 Million, an increase of almost 20 times,” he added.

The value of contracts to be awarded to Ugandan companies during 2022 is projected to be more than USD 1 billion, five times the value registered last year.

On how Uganda can reap more from the sector, Mr. Rubondo said, “benefits from oil and gas sector can be increased from the revenues which are to be generated, and the participation of Ugandans (in National Content) and the linkages between oil and other sectors of the economy such as agriculture, education, housing, among others.”

Listing a range of look-ahead activities that contractors and subcontractors need to focus on, Ms. Peninah Aheebwa, the Director Technical Support Services at the PAU said there is need to maximize utilization of Ugandan goods and services, increased employment of Ugandans and more of skill development.

She also urged all contractors and sub-contractors to seek partnerships and collaborations to access the various opportunities that are in the development stage of the oil and gas sector.

The conference also shared insights on the project regarding environment, social and governance (ESG) issues that must be addressed to ensure sustainability beyond the life the projects.

ESG is embedded in relevant polices, legislation and standards. For example in Uganda, there is a no flaring policy, application of best available technology (BAT), environmental and social impact assessment and audits, petroleum revenue management, and oil spill preparedness and response, among others.

“In terms of Environment, we have avoided most of the sensitive areas and the design levels are stringent. Our system ensures that we do not have issues of spillage,” said Mr. John Habumugisha the Deputy Director of the East African Crude Oil Pipeline (EACOP) company.

Emphasis was also put on the funding gaps as many of the local contractors had shown that one of the biggest impediments, they have met is accessing credit to finance the contracts.

“There are two problems for local players in the oil sector: Lack of finance and lack of capacity. For finance, we are now working with insurance players to hedge the risks and on capacity, we are training them,” said  Mr. Phillip Niwamanya, a Business Executive from ABSA Bank Uganda.

The local Ugandan companies with contracts in the oil and gas sector that shared their experiences at the conference included Atacama Consulting, MSL, New Plan Uganda, Three-Ways shipping, Pearl Engineering, Luwero Industries, Living Earth,  and the Ugandan local banks. The conference was attended by about 450 physical and over 2000 virtual participants.

Yusuf Masaba is a Corporate Affairs officer at the PAU