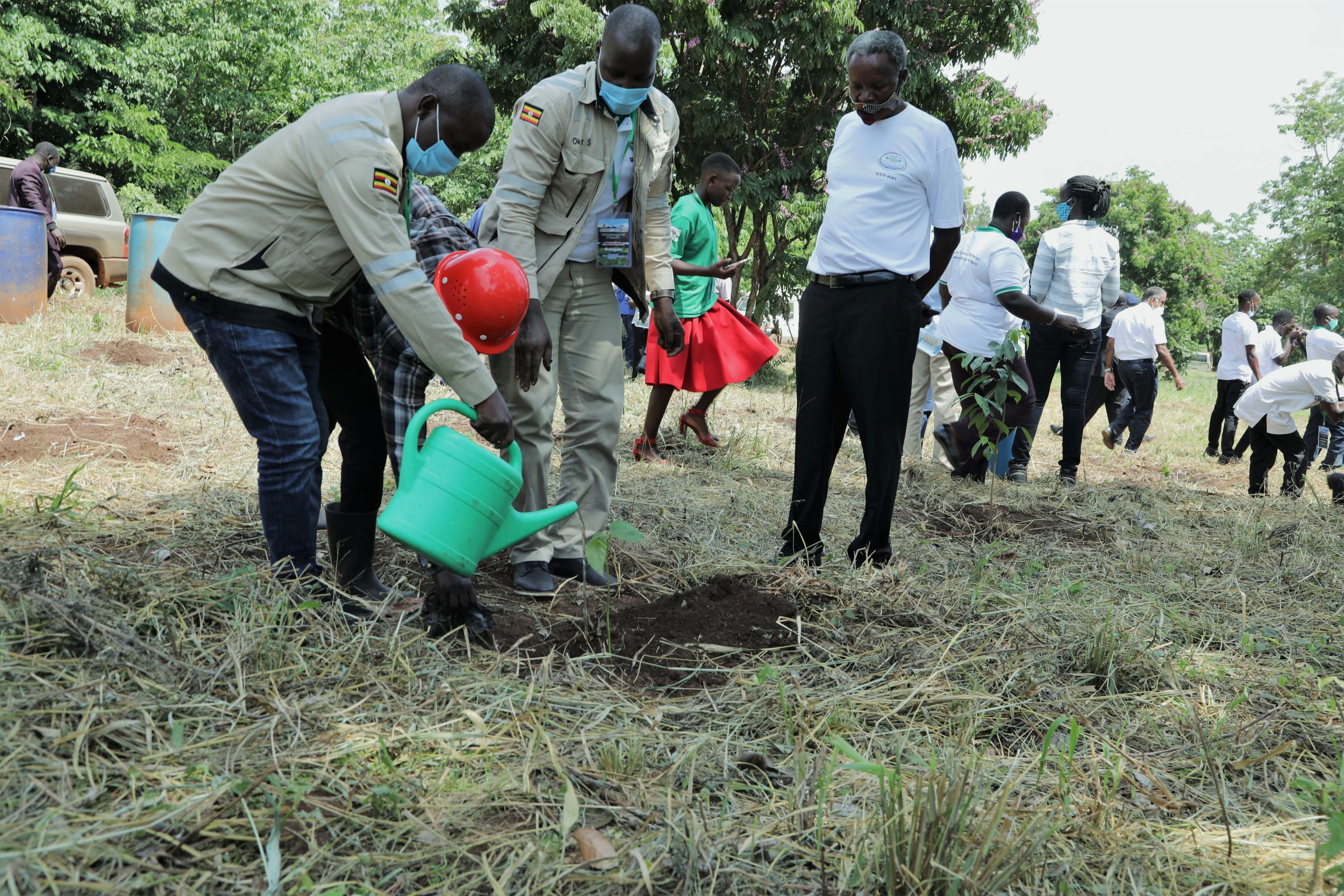 In this second article of my series on environment and social aspects related to oil and gas developments in Uganda, I specifically address the concerns relating to Green House Gas (GHG) emissions from Uganda’s oil and gas projects. Using facts and published statistics, I point out the glaring gaps and double standards by sections of the international media and environmental activists protesting Uganda’s oil projects. I demonstrate why the mob injustice against Uganda’s oil projects, especially protests against the East African Crude Oil Pipeline (EACOP) Project do not hold water.

There is no doubt that the concentration of GHGs in the atmosphere has been increasing since the 1900s and this is leading to undesirable climate related effects globally.  Of particular concern has been the sharp increase in carbondioxide (CO2), triggered by post World War II industrialization, creating an upward trend that has not been reversed to date.

The main human activities that generate GHGs are Production and Use of Energy; Industrial Processes and Product Use (IPPU); Agriculture, Forestry and Other Land Uses (AFOLU); and Waste Generation. Globally, CO2 from the production and use of energy represents the largest source of human induced GHGs, at approximately 75%. International efforts to combat climate change have therefore focused on the production and use of fossil fuels (crude oil, natural gas, and coal) which are the primary source of CO2 emissions.

According to the United States Environment Protection Agency website  https://www.epa.gov/ghgemissions/global-greenhouse-gas-emissions-data, the United States and European Union bloc (including the United Kingdom that exited the bloc in 2020), which constitute about 10% of world’s population, were responsible for about a quarter (25%) of the global CO2 emissions from fossil fuels and industrial processes in 2014. Ironically, the international environmental activists and media making the most “noise” about stopping Uganda’s oil projects are from these countries. 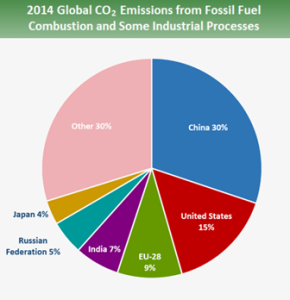 To the contrary, Africa, the second largest and second most populous continent, home to about 20% of the world’s population is responsible for just only 3% of the global CO2 emissions. Altogether, the bottom 100 least emitting countries, which include nearly all the 54 African countries (except South Africa, Nigeria, Algeria, Morocco and Egypt) account for less than 5% of the global CO2 emissions. Therefore, Africa’s fossil fuel production and consumption to date bears no responsibility for the world’s rapid climate change.

An Inventory of Uganda’s GHG emissions

According to the 2019 Uganda First Biennial Update Report to the United Nations Framework Convention on Climate Change, Uganda’s emissions in 2015 stood at 90 million tons (mT) of carbon dioxide equivalent (CO2e). Due to limited access to energy (energy poverty) and significantly lower level of industrialization, Uganda’s GHGs are dominated by Agriculture, Forestry and Other Land Uses (AFOLU). The AFOLU sector accounts for approximately 86% of Uganda’s GHG emissions. The entire energy sector which includes transport, electricity generation and oil and gas exploration and production accounts for just 10%, of which the transport subsector accounts for about 66% of the emissions from energy sector. Therefore, unlike the developed countries whose major source of GHG emissions is from the burning of fossil fuels for electricity and industry use, Uganda’s largest opportunities for GHG reduction are in the AFOLU sector, and not in the energy sector. If anything, as a country, we still have a challenge of energy poverty that needs to be addressed. The average oil consumption per person in the US is about 20 barrels per year. In Uganda, it is about 0.2 barrels per year. The average consumption per person in the US is, therefore, 100 times fold compared to Uganda.

Uganda’s oil projects have been designed to generate technologically lowest possible carbon footprint and overall, the projects fall within the category of “low emission”. The carbon dioxide equivalent (CO2e) emission per barrel of oil for Uganda’s upstream and midstream projects is estimated to be in the range of 20-45 kgCO2e. This is well below the global average of 70-100 kgCO2e.

Uganda’s recoverable oil resources are currently estimated at about 1.4 billion barrels. Assuming an average of 30 kgCO2e per barrel, the total emissions are estimated at 42 mTCO2e over the production period of 25 years which is an average of 1.68mT per year.

However, in comparison, over a period of ten years, between 2005 and 2015, during a period when there was no oil production, Uganda’s GHG emissions nearly doubled from 53 to 90 mT. Forest degradation, and deforestation were majorly responsible for the increase. The increase of 37mT in a period of ten years is equivalent to an average of 3.7mT per year, which is more than double the average increase of 1.68mT expected from Uganda’s oil projects.

In my previous article, I stated that there is an apparent “environmental fashion” being driven by some activists, which does not consider the uniqueness of developing countries such as Uganda, and the African continent in general. In 2020, the energy (including transport) and industry sectors in the US, powered majorly by fossil fuels, accounted for 76% of GHG emissions. By contrast, in Uganda, these sectors account for just 10%. 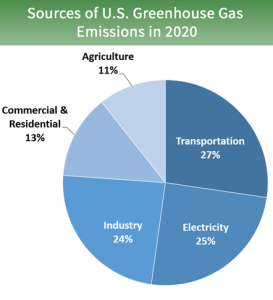 These statistics demonstrate that there is no one size fits all approach if the world is to tackle this climate change problem. For example, Uganda’s GHG emissions from industrial processes and products are just 0.55% of its total emissions. Yes, we can decarbonize our industries and products as much as possible, and implement clean development mechanisms, but as a developing country, this category of emissions is expected to increase as Uganda becomes more prosperous through industrialization. Likewise, the emissions from the energy sector are expected to increase as more Ugandans access energy and our country moves closer to ending energy poverty.

Uganda, through the Climate Change Secretariat under the Ministry of Water and Environment has developed and initiated the implementation of Nationally Appropriate Mitigation Actions to achieve its fair share of a 25% reduction in GHG emissions by 2030. The priority actions include increasing energy efficiency by replacing the traditional cooking stoves with improved stoves. This action alone is estimated to lead to a reduction of 17.4 mT CO2e over a period of 24 years. Further reductions will even be achieved by the planned use of the country’s oil and gas resources to produce Liquified Petroleum Gas (LPG) which is a cleaner fuel. Production of LPG from the country’s oil and gas resources and its use both in the country and in the region will significantly reduce dependency on wood fuel, which is responsible for massive deforestation in Uganda. The other priority Nationally Appropriate Mitigation Actions include climate smart agriculture, restoration of forests, vehicle fuel efficiency and improving transport systems. These are the actions that our development partners should focus on to support Uganda to meet and even exceed her GHG emission reduction targets.

Uganda’s oil and gas resources will provide more Ugandans access to cleaner energy, eliminate emissions associated with import of petroleum products, provide alternative sources of livelihoods and lessen dependency on environmentally degrading economic activities and generate the revenue required to invest in climate smart and clean development mechanisms. Therefore, in Uganda, the oil and gas industry is part of the solution to achieving GHG reduction targets, not the problem.  It is therefore important that Ugandans do not allow themselves to be used to demonize the country’s oil and gas projects while other countries continue to use their oil and gas resources to prosper.

In my next article, I will address the concerns about the energy transition and explain how oil and gas resources remain critical in the global energy mix for the foreseeable future and are key in ensuring a smooth energy transition.

By Dr. Joseph Kobusheshe, is the Director Environment, Health, Safety and Security