Uganda’s Oil and Gas Projects: The Value at Stake 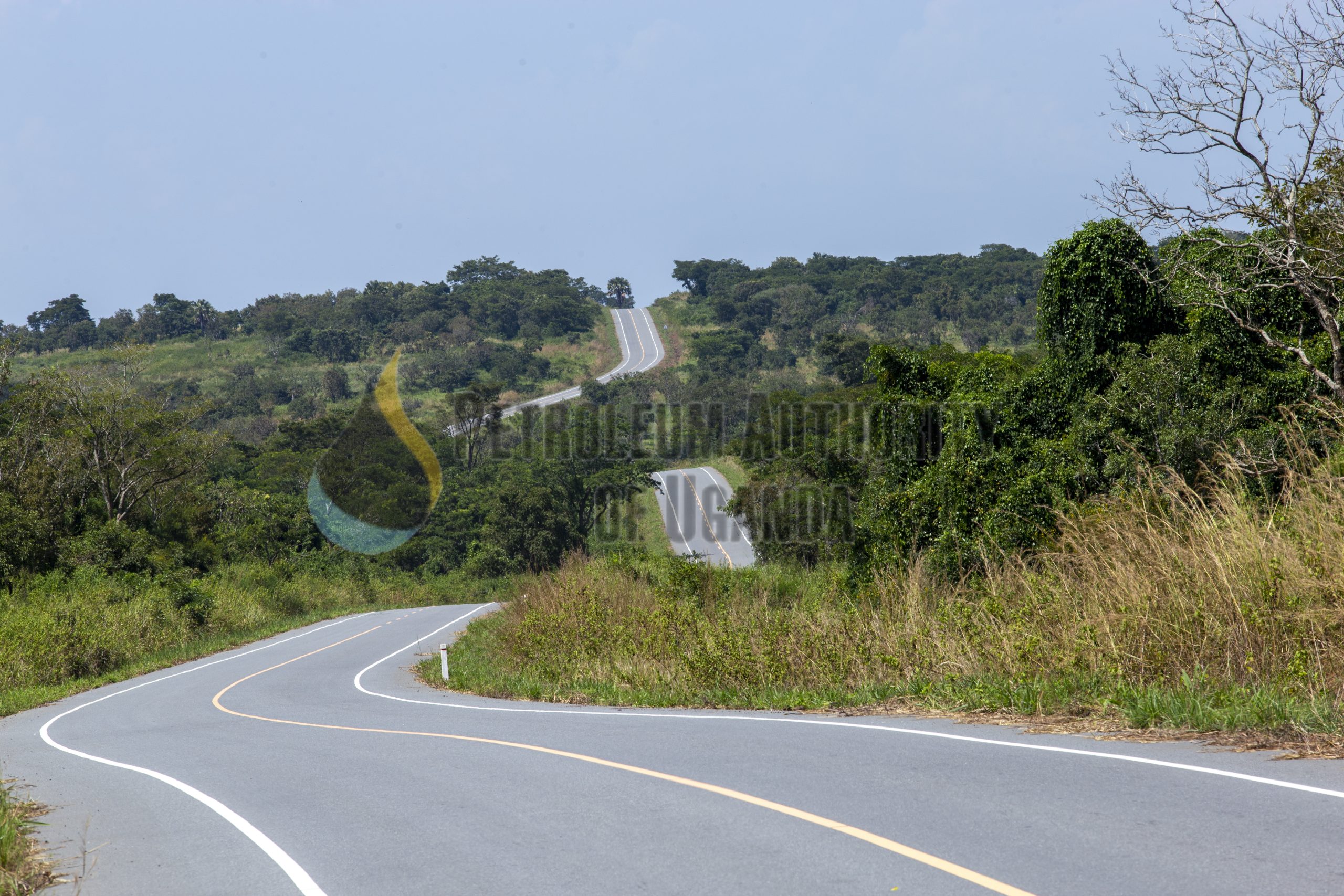 The East Africa Crude Oil Pipeline project (EACOP), which is meeting resistance from opponents of Uganda’s development, is one of the projects Uganda has planned to monetize its oil and gas assets, which are currently valued at US$ 116 billion (gross). These assets are certainly among the country’s biggest economic assets in terms of value.

Some of the strategic reasons for choosing to export about 57% of the crude oil to be produced in the country are to access the international market, enhance the country’s export base and the trade balance which is currently in deficit.

The other project for monetizing the country’s oil and gas assets is the Refinery, with a strategic objective of meeting Uganda’s petroleum products needs that are currently estimated at 36,000 barrels/day and growing at an annual rate of about 7%. This would also save the country foreign exchange expenditure of over US$ 1.23 Billion per year.

Among the main petroleum products expected to be produced under the oil production (Tilenga and Kingfisher) and the refinery projects is Liquified Petroleum Gas (LPG). Production of LPG, which is mainly used in households and would be a key replacement to the use of charcoal and firewood is expected to be produced at a scale of over 300,000 tons per year at peak production. This amount is close to the total amount of LPG currently being consumed in the whole of East Africa.

The life cycle of the above projects is under 30 years, which is far below the target by the most radicle energy transition pledges.

The size of Uganda’s economy as reported by the Ministry of Finance Planning and Economic Development is US $ 45.7 billion, with expected domestic revenue of US $ 6 Billion (13% of GDP) in 2022/23.  The economy is dominated by the services sector at 41.5%, followed by industry at 26.8% and the agriculture sector at 24.1%. The country recorded a trade deficit of US$ 413.80 Million in May 2022. In addition, the country has very high levels of unemployment.

Economies like the United Arab Emirates (UAE) and Norway, among others, were not in a different situation from the above at the start of their oil and gas industry. These economies were able to leverage on their oil and gas resources to achieve economic take off. Uganda’s oil and gas projects can significantly contribute to the country’s economic takeoff, given the fiscal and non-fiscal benefits expected to accrue to the country.

The key drivers include:

The frameworks for the country’s oil and gas sector now in place together with the activities being implemented make it clear that the oil and gas industry is going to be transformational on Uganda’s economy and in improving the wellbeing of its citizens. It is therefore only rational that this upcoming transformation is welcomed and supported. The benefits are coming in a number of forms; i) revenue from the agreed fiscal regime; ii) the participation of Ugandans and Ugandan Enterprises through employment and provision of goods and services also known as National Content; iii) local social and economic development; iv) sectoral linkages to ensure broad based growth; and v) improved investment rating of the country, among others.

Fiscal benefits through the agreed regimes (US$ 70 Billion)

From 2017 to 2021, a total of UGX 577.4 million was paid by the five Oil Companies licensed in the country. The revenue was in the form of Income Tax, PAYE, Stamp Duty, Value Added Tax and Withholding Tax.

During the same period, US$ 7,662,580 was received from the Oil and Gas Sector in form of Non-Tax Revenue (NTR). These payments were received with respect to Application fees, Bonuses, Data sale, Surface rentals and Training fees.

Expected revenues through the agreed fiscal regime after first oil

The fiscal regimes between the upstream (Tilenga and Kingfisher) and midstream (EACOP and Refinery) projects differ and so are the expected returns to government from the same.

The pipeline project is managed through the EACOP Company with shareholding from the Uganda National Oil Company (15%), the Tanzania Petroleum Development Corporation (15%) and the two oil companies; TotalEnergies (62%) and CNOOC (8%). Government will hold a 40% share in the refinery project.

In this regard, from the three main projects as indicated in the chart below government earns a total of US$ 69.7 billion over the projects’ life and an average of US$ 2.8 billion per year. This expected average annual income to government is 47% of the projected domestic revenue collection for the 2022/2023 (US$ 6billion). It is expected that in line with the Public Finance Management Act 2015, this money will be earmarked for investment and infrastructure development therefore, bridging the infrastructure financing gap estimated at US$ 400 million per year. 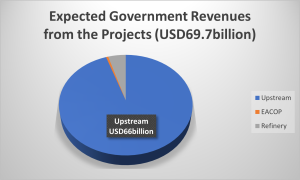 National Content is regarded as value added or created in the Ugandan economy through the employment of Ugandan workers and the use of goods produced or available in Uganda and services provided by Ugandan citizens and enterprises. The main objectives are: –

Out of the US$ 15 billion investment in the sector, the Petroleum Authority of Uganda is working with partners to ensure that at least 40% is retained in the country through national content.

Currently, about 10,111 Ugandans are estimated to be directly employed in the sector, and this number is expected to grow to 13,000 at peak. The investments in the sector will also stimulate indirect and induced employment in the region to a tune of 35,000 and 100,000 respectively. These opportunities are valued at over US$ 1 Billion.

The contractors and subcontractors from over 145 contracts that have been or are to be awarded have proposed training for Ugandans to the tune of US$ 20 million (more than 2.9 million manhours).

In addition, the industry has committed to the capacity building of Ugandan companies through Supplier Development programs, promotion of Joint Ventures and the Industry Enhancement Centre. US$ 7.7 million has been committed to these programs under the Tilenga Project. It is projected that at least US$ 5 million will be spent on capacity building of suppliers and their contractors throughout the development phase in the Kingfisher Development and the East African Crude Oil Pipeline (EACOP) projects.

Supply of goods and services by Ugandans and Ugandan Enterprises

During the exploration phase out of US$ 3.5 billion spent in the country, US$ 980 million (28%) was retained in the economy through Ugandans providing goods and services.

In the development phase, over 145 contracts worth US$ 6.8 billion in the upstream and midstream have been concluded. The value of contracts confirmed to be executed by Ugandan companies at Tier 1 and Tier 2 is currently worth US$ 1.73 billion (25%).

Transfer of Knowledge and Technology

Experience has shown that development of the oil and gas industry can create an enclave economy if its development is not integrated within the wider economy. Therefore, harnessing the linkages between oil and gas and other sectors of the economy is key for broad based, inclusive economic development.

The definition and exploitation of the linkages with Agriculture, Financing/Insurance, Manufacturing, Education, Transport, Tourism, Health, Land Use Planning and Housing is already ongoing.

In terms of agriculture, there is an opportunity to exploit the demand expected to be created by the workforce, the population influx of over 1miilion people brought into the region by push factors, and the export market because of the second international airport in the region. The following investment opportunities are required to tap into these markets.

In terms of health care services, over US$100million in clinical and non-clinical revenue generation opportunities is estimated including medical evacuation, incidental health care, fitness for work examination, dental services, pharmaceuticals and laboratory service, supply of medical equipment, supply of ambulances both air and road, ICUs and accident and emergency units.

In terms of housing, gaps in supply to meet the expected demand have been identified in all aspects including, residential, industrial, office spaces and hospitality.

The public, especially the sects fighting the development of the EACOP, should be aware of the value of over US$ 81 billion (almost double Uganda’s current GDP) at stake from Uganda’s oil and gas projects. Additionally, the perceived environmental impacts have been fully addressed through the established Environment and Social Impact Assessment (ESIA) processes to the highest international standards. Uganda’s projects will deliver jobs, revenues of a magnitude that this country has not collected before from a single sector, improved standards of living for Ugandans, an accelerated economic take off, diversification, balanced economic growth, and an improved investment rating for the country among others. There are enormous opportunities that every Ugandan will benefit from, directly or indirectly, in which ever sector they are active.