The state of Uganda’s Oil and Gas Sector: 10 infographics that tell the most important things that you must know about Uganda’s oil and gas sector 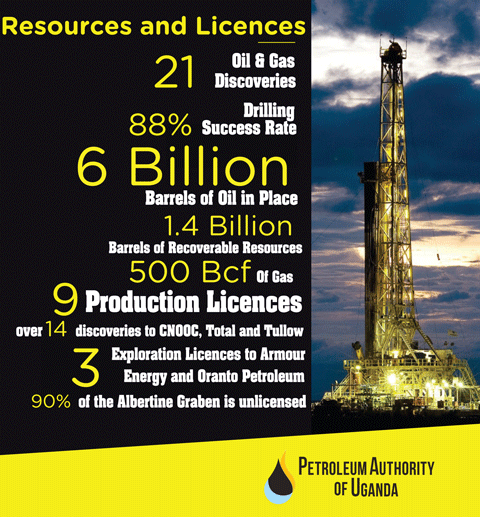 The Government of Uganda and Total on 11th September 2020, initialled the Uganda Host Government Agreement (HGA) for the East Africa Crude Oil Pipeline (EACOP) project. Subsequently, the Heads of State, their Excellences President Yoweri Kaguta Museveni of Uganda and President Dr. John Pombe Magufuli of Tanzania on September 13, 2020 met in Chato, north-western Tanzania and signed an MOU to fast track the EACOP project. Later, on October 26th, the President of Total Exploration and Production Africa Nicolas Terraz and the Attorney General of the United Republic of Tanzania Prof. Adelardus Kilangi initialled the Tanzania HGA, paving the way for the construction of the 1,445km long pipeline that will transport crude oil from Uganda’s oil fields in the Albertine Graben, starting from Hoima, to the Port of Tanga. In a November 11th, 2020 interview, with CEO East Africa, Ernest Rubondo, the Petroleum Authority of Uganda’s Executive Director said that with the two agreements out of the way, the journey to first oil was now in earnest. Here below we present you 10 infographics that have almost all the necessary information you need to know about the state of Uganda’s oil.